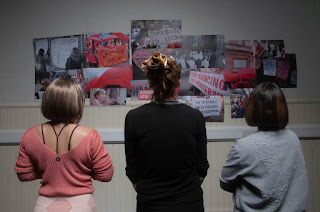 Workers is an artistic and political film, the result of the collaboration between the Swedish artist and filmmaker Petra Bauer and SCOT-PEP a sex-worker led organization in Scotland. In this film the sex workers themselves appear as much as they can, that is to say, as much as they feel safe to. One of the first things that struck me while watching this film was that the faces of the sex workers never really appeared. We only see pieces of them. We don't know their names, we see their backs, their hands, their bodies. The reason for that is not simply an artistic choice. The sex workers do not feel safe to show their faces, to expose themselves and that is because of the precarious situation where they live. They are marginalized and vulnerable and often do not have their rights acknowledged or respected.
I had the chance to watch this intense film yesterday (no longer yesterday, because I left this post exist only in my draft for a long while, but let's pretend that it was yesterday).
I watched it yesterday while participating in a workshop with Petra Bauer in Bergen, organized by Bergen Kunsthal. The workshop was called "Feminist Organising and Resistance". I will try to write about it in the near future. For now, what I want to share is the fact that I started watching this movie with all my prejudices and pre-formed ideas about the issue in cause glued to my skin and interfering with my capacity to really listen. Among those is the idea that sex work is a very complicated issue where exploitation has a relevant place. That is not to say that I believe that all sex workers are exploited. But instead to highlight that many are, including children that are abused and forced into this life, and people in precarious situations, who are broke and abused. Another strong belief of mine was that the Swedish law that criminalizes the clients of sex workers was a good thing. My intuition was that because there are so many sex workers that are exploited it was important to take legal measures to address it. Moreover, it was also important that such laws would not criminalize the sex workers themselves, which are in a vulnerable and precarious situation, or as we got used to saying, are the victims. Let me stress again that those were some of my own prejudices and ideas. They are not what the movie is talking about.
Workers is a film that gives voice to sex workers. They talk about their lives and their needs. In dialogues happening without a clear continuation, they bring to us their raw struggles. One woman makes visible the relationship between illegal migration and sex work. Talking about her own life she stresses that what brought her to this type of work in the first place was the fact that she was an illegal migrant. But the film does not focus in explaining the relation between illegal migration and prostitution. What it does is to give voice to a group of sex workers that here and there share pieces of their stories. What all the sex workers seem to have in common is the interest in decriminalizing sex work. A certainty that appeared many times was the one that paints a saver and less vulnerable life for sex workers if the clients would not be criminalized. One of the sex workers explains that because they have fewer clients they literally end up accepting shady clients that otherwise, they would refuse. That is, the small numbers of clients force sex workers to accept to work in riskier conditions.
Among the audience, there was a girl that was a sex worker herself. She said that it bothered her that so many people wanted to save her, to rescue her from her dark life, and to help her into the light. She then made fun of how life in the light would look life. She mentioned numbers that I no longer remember. Her point was that she did not want to be rescued. She was content with her life as a well-paid sex worker and she did not want to become a waitress that could not afford the lifestyle that she was used to. One other girl from the audience left the room, without bothering in hiding her disagreement.
I was uncomfortable, but I stayed. Perhaps what we need in order to truly be able to discuss political problems is to create space to listen to those that think differently from us. The film Workers has the function of making the voice of sex workers themselves hearable. Petra Bauer seemed genuinely happy that the girl that presented herself as a sex worker had so much to share. Her joyful response to that provocative woman was for me the materialization of Bauer's claim that her film was in itself an alliance to the cause of sex workers.

Now, years after the mentioned workshop, when all that stayed with me is a kind of an emotional memory of that event, I find myself asking what does it mean to create a piece of art that is in itself an alliance with a specific group and its causes and interests. I find myself questioning if it is not best to simply give voice to marginalized groups, instead of making an alliance with them. Then I find myself questioning if objectivity indeed exists. Is it possible to truly give voice to a group without first been moved towards it by some kind of empathy?


Today is a day to finish a text with questions.

Be well and until next time. 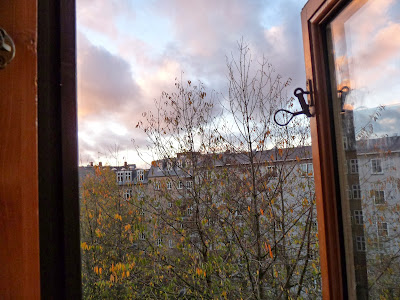